"CHEROKEE DAVID" GENTRY and his Wives

Life with the Cherokees

Abstract
We present here the first of two issues of the Gentry Journal devoted to Gentrys with known or proposed close ties to Indians, namely David Gentry and Elijah Gentry. We will discuss David's relationships here and follow it with a separate issue for Elijah.

Introduction
David Gentry is best known for the fact that he married Tiana Rogers. Cherokee Indian records tell of Tiana (also known as "Diana" and "Talahina") Rogers, who was famous for having been married briefly to Sam Houston, following his term as Governor of Tennessee and before he became President of the Republic of Texas. These include statements that she was married first to a David Gentry, nicknamed, "Cherokee David". We present here a summary of what we have found about David and discuss his history and possible ancestry.

David Gentry's Indian Relationships - the Ezekial Buffington Family
Any discussion of David Gentry needs to start with the tangled relationships of the families into which he married. The first of these families is that of Ezekial Buffington. Ezekial was born in Pennsylvania in about 1742. His father and a brother moved from there to South Carolina in about 1754 due to the lack of security from attacks by Indians supported by the French during the French and Indian War. They settled on Turkey Creek, in what was later Abbeville District (to be distinguished from the creek of the same name in Edgefield District). The family acquired a considerable amount of additional land in Indian territory in South Carolina that later became Pendleton District. Ezekial had two children by an unknown white wife while living in South Carolina. After the death of that wife, he left the two children with his father and other relatives and entered into trade with the Cherokee Indians living along the Hiwassee River in what became Tennessee. There in about 1767 he married Elizabeth, a daughter of William Emory and Mary Grant. Emory was a wealthy and influential Indian agent himself. His wife was the daughter of Ludovic Grant, a Scotsman who was an agent of the Governors of South Carolina in their dealings with the Cherokee and was well respected by both the whites and the Indians. His wife was a full-blooded Indian, so their daughter, Mary, and granddaughters were one-half and one-quarter Indian respectively. This and the other relationships below are taken primarily from the compendium of Cherokee genealogy prepared by Emmet Starr, "History of the Cherokee Indians and Their Legends and Folk Lore", and first published in 1921<1>.

Ezekial and Elizabeth had a daughter by that marriage. Then Ezekial had to return to South Carolina to deal with estate proceedings connected with the death of his father. He returned to his Hiwassee home after some delay, in about 1770, to find that Elizabeth had married again, perhaps thinking Ezekial had died. She married another very well respected Indian agent, John Rogers. We will have more to say about him in a moment. Ezekial turned around and married Elizabeth's older sister, Mary, who was recently widowed. (Casual marriage relationships among well-to-do Indians were not at all uncommon). He remained married to Mary by whom he had six children until her death in about 1800. During this period he travelled frequently between Pendleton District where he owned property and Indian territory. In 1790 he and his oldest son, Oburn (white) were listed together without family in the Pendleton District census. In 1800, he was in that census again with family members for both Oburn and Ezekial including a daughter with Ezekial of an age appropriate for David's future wife Mary. Eventually Ezekial, some time after the death of his wife Mary, moved to Jackson County, Georgia (which eventually became Hall County). He died there and court records relate that his estate was contested, his oldest son, Oborn refusing to share any of it with his younger part-Cherokee half-siblings. Before leaving Ezekial, it is noteworthy that he had three daughters, each named Mary, by three different wifes. This has led to great confusion in identifying the Mary that eventually married David Gentry (see chart below).

As to how David became connected to Mary Buffington, we can only speculate. We believe that David was the youngest son of David-III who in turn was a son of David-II Gentry, son of Nicholas Gentry the Immigrant. David-III had been born in Hanover County, Virginia, then spent many years growing up in Lunenburg County, Virginia. When his father died there in 1766, David had accompanied his step-mother and most of his sibling brothers to South Carolina where Sarah Gentry was able to claim 450 acres of land adjacent to the Saluda River in an area that became Edgefield District. David-III moved north from there into land in South Carolina that was protected at the time as Indian land. There he settled along the Keowee and Saluda Rivers. He was probably simply a squatter originally, but after the state acquired most of the Indian land by treaty and organized two new districts, Pendleton and Greenville, he entered a claim for and obtained title to these lands. This is just preamble, however, to our questions about David-IV, son of this older David. The younger David, born about 1778, was living with his father and included in the census in Pendleton District in 1790 and was in the census in Greenville District in 1800. David is known to have been a blacksmith and we speculate that in the course of time, he may have worked for Ezekial Buffington and became acquainted with that family. He probably married Mary Buffington in South Carolina in about 1803 and then accompanied her family back to Cherokee territory where he lived from then on. He and Mary had three daughters by that marriage before Mary died about 1818 . 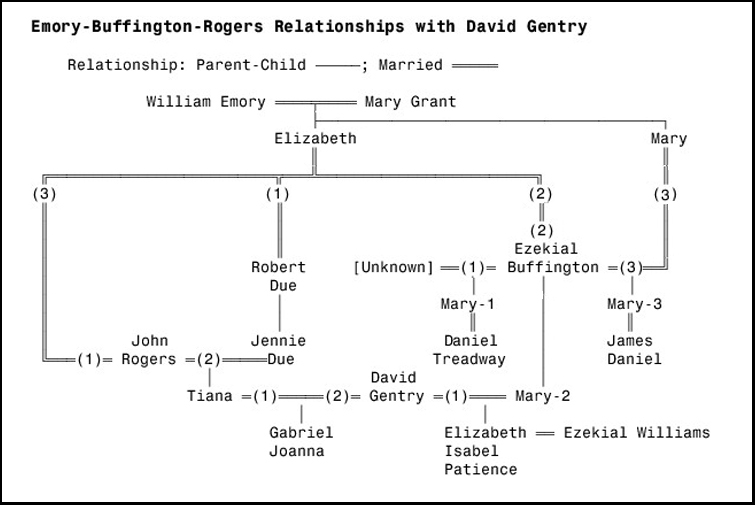 The John Rogers Family - Marriage to Tiana Rogers
John Rogers was a fellow Indian agent and associate of Ezekial Buffington and William Emory in the Cherokee towns along the Hiwassee River. In fact it was he that married Ezekial's wife, Elizabeth, while Ezekial was away in South Carolina (whether after a divorce or not we do not know). In time he became rich and very influential both in his own right and based upon the accomplishments of his sons. He had five children by his wife, Elizabeth, then when she died he married again, a step-daughter, Jennie Due, a daughter of Elizabeth's by an earlier marriage. John had five more children by Jennie, one of whom was Tiana (or Diana as she was called by the whites). [Tiana's name as it appears in the official documents found in the War Department and Bureau of Indian Affairs is spelled both "Diana" and "Dianna" Rogers. Her name among the Cherokee was "Tiana", supposedly because the Cherokees had difficulty pronouncing the "d" in Diana, so we will use it here. The name "Talahina" found on her gravestone seems to have no foundation in fact.] 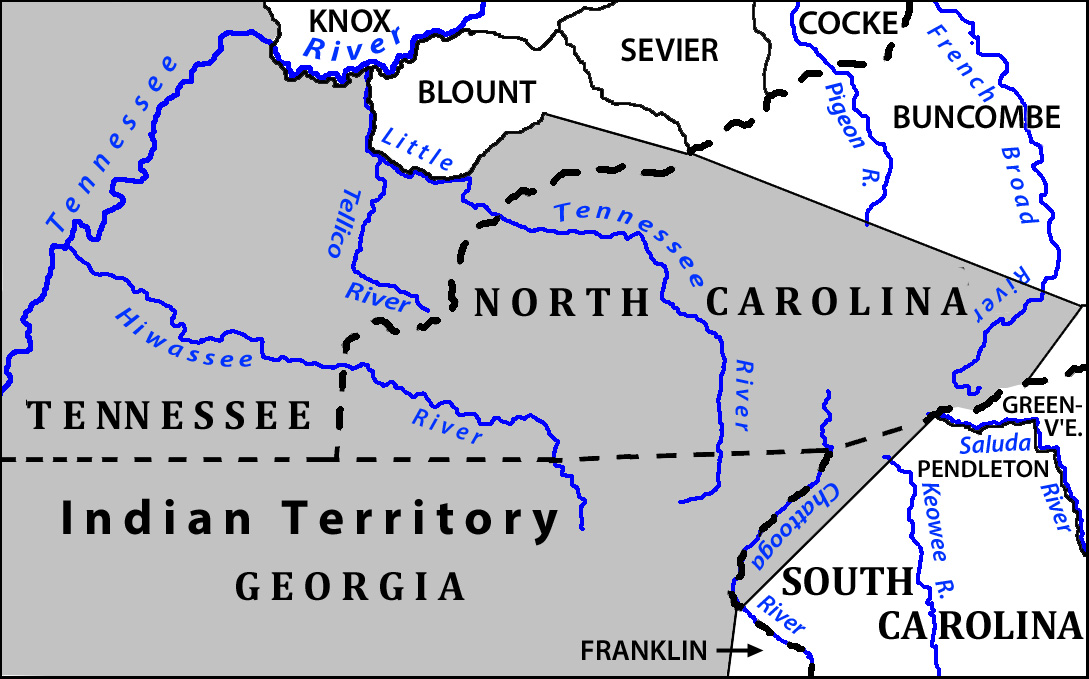 We can assume that during his years of marriage to Mary Buffington, David Gentry was living with the Cherokees at or near the site of the Cherokee village where John Roger's trading post was located. In 1818, Rogers and many of his Cherokee neighbors moved to a new location on the Arkansas River in the vicinity of present-day Dardanelle, Arkansas. This was at the time of the Calhoun Treaty, ceding Indian lands between the Little Tennessee River and Hiwassee River to the United States. Some 6000 Cherokees left Tennessee, forced to move to new Indian lands set aside for them in Arkansas. It was at this time also that McMinn and Monroe Counties, Tennessee, were established in the former Indian Territory. David Gentry, whose wife Mary died at about this time, accompanied Rogers to his new location.

David Gentry married Tiana Rogers in about 1820. She was about twenty years younger than David, born about 1796. He had two children by Tiana. Of David's five children, only one survived long enough to marry. David continued to move successively westward as the Cherokees were forced out of Arkansas into Indian territory in Oklahoma. While living there, David is said to have died in an insignificant border skirmish with Osage Indians in about 1829.

After David's death, Tiana married Sam Houston, whom she had known earlier when he was living in Indian Territory. This marriage, in an Indian ceremony, is said to have taken place about 1830, in spite of the fact that Sam was not yet divorced from his first wife. This was during a period in Houston's life after he was elected Governor of Tennessee in 1826 and then resigned the governorship in 1928 and retired in exile to the Cherokee territory in Arkansas. Subsequent to this, a biography of Tiana in "Pitter's Cherokee Trails", comments, "Several years later Houston, being a restless soul, took off to liberate the Republic of Texas. He asked his Cherokee wife to go with him but Tiana wanting to settle down refused to leave [her home in eastern Oklahoma]. Later both Tiana and Houston remarried and in 1838 Tiana Rogers Houston died of pneumonia." Tiana was buried in an unmarked grave, but in 1904 at the urging of her supporters, the remains of Tiana were exhumed from her supposed grave and reburied in the "Officers Circle" at Fort Gibson National Historical Cemetery, Muscogee County, Oklahoma, where her headstone is marked, "Talahina R. wife of Gen Sam Houston".

References
J.J. Hill, "Old Cherokee Families", "Old Familes and their Genealogy", reprinted from "History of the Cherokee Indians and Their Legends and Folk Lore" by Emmet Starr, Oklahoma City, 1921, pages 303-476. Reprint and index, Norman, OK 1968.
[Starr's use of index numbers has been modified slightly to improve readability. Individuals or groups of siblings or half-siblings are identified by superscript generation numbers with an index number for each individual showing the order of the individual in his or her family. This index number when added to the base index for that generation gives the complete number for that individual.]

© 2020, W.M. Gentry - All rights reserved. This article may be reproduced in whole or in part for non-commercial purposes provided that proper attribution (including author and journal name) is included.