Abstract
A summary of the movements of the three major branches of the early Gentry family is provided in parallel time-lines in fifteen-year time increments ending in 1820. Their movement from Central Virginia by families is outlined along with the fate of each of the second and third-generation members of the family.

Introduction
During the past year, on the pages of the Journal of Gentry Genealogy, we have published comprehensive descriptions of much of what is known about the first three generations of the Gentry Family in America. As one concentrates on each of the three major branches of the family, it is easy to overlook what is going on in another branch of the family at any given time in the life of the branch under study. The present article is designed to paint a broad-brush picture of activities that took place simultaneously at given periods of time in the lives of Joseph-II, Samuel-II, and Nicholas-II Gentry and their immediate descendants.

For this purpose, we will consider the time period between 1700 and 1820, dividing the time into fifteen-year increments, and in each time increment consider what was happening to members of the three family branches. For this study, we will concentrate on the male members of the family, thereby following the Gentry surname from one descendant to another.

During this increment of time, the Gentry family was living in Hanover County, Virginia. The period opened with a single family unit consisting of Nicholas-I, the immigrant and his three sons, Joseph-II, Samuel-II, and Nicholas-II living together in one household on Nicholas' plantation in the vicinity of Totopotomoy Creek. [The suffix -I, -II, and -III will be used in this article to denote the generation of the individual with respect to Nicholas-I.]

Nicholas-I's name appeared a number of times in the vestry records of St. Paul's Parish, up until 1709, and thereafter disappeared from the records. From this, we have concluded that he died in the period between 1709 and 1712, when the next Gentry reference appeared in the records.

Joseph-II's name appeared in the vestry records with Nicholas in processioning records for 1709, from which we deduce that he was probably working a portion of Nicholas' land on his own account and living separately with his immediate family. We also deduce that he was of age to hold land. When Joseph's name next appeared, in 1712, without Nicholas, we can assume, that as the oldest son in the family, the family land was now in his name as far as vestry records were concerned. Joseph's brothers, Samuel and Nicholas may or may not have still been living on the family plantation by the end of the period in 1715. We will see in a moment that within the next few years, both moved westward, but the exact time of their departure is not known.

James and John Gentry have been considered by many to be sons of Joseph-II, and David Gentry a son of Samuel-II. This author now believes them to be children of Nicholas. In either case, James, David and John were born during this time interval, as was also Joseph's son William-III
[Editor's Note. In view of the change in assumed parentage of James, David and John, sections of the manuscript relating to those family's movements have been extensively relocated from their original listing with Joseph's, Samuel's and Nicholas' families to separate listings of their own.]

With this time period, the six Gentry brothers and their descendants began to divide and go their separate ways. Accordingly, we will consider each family branch separately. 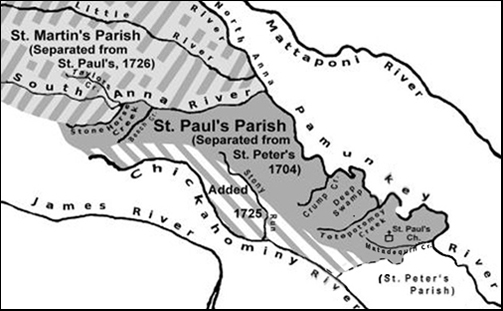 
Joseph appeared in St. Paul's Parish processioning records in 1716, 1719, 1720 and 1724, each time in the same precinct and with the same neighbors as at the time of his original appearance with Nicholas. This clearly indicates that he remained on the family plantation on Totopotomoy Creek. Joseph's son, Joseph-III, was probably born in about 1720.

Editor's note. The original version of this document treated James and John as sons of Joseph, and David as a son of Samuel-II. The author for some time has believed that all three were sons of Nicholas-I and that the time has come to revise and correct this document.]


We can speculate that all three of the younger sons of Nicholas left home towards the end of this time period and probably lived with either one or the other (or sequentially with both) of their brothers, Samuel and Nicholas. David is believed to have married during the end of this time. 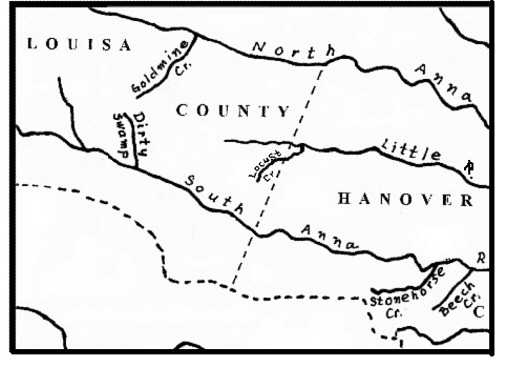 Samuel and his entire family moved over a period of several years from Louisa County south to Lunenburg Co (see Fig. 3). Nicholas-III was the first in 1747, Joseph-III in 1752, Allen-III and Simon-III about 1755 to 1756. Simon moved back north by 1760 to Cumberland County (see Fig. 3) where he was married and lived the rest of his life.

The British Crown established the Line of Demarcation in 1765, roughly along the line of the Blue Ridge and Appalachian Mountains. Colonists were prohibited from settling on land in the Indian territories west of this line.

John is mentioned very briefly in a reference in Augusta County in 1768, just prior to the formation of Botetourt County from Augusta Co (see Fig. 3).

With the coming of the Revolution, the Line of Demarcation was no longer a bar to westward expansion after 1776. This opened up a tide of migration beginning in the late 1770's led by Daniel Boone and others, to unsettled lands that later became Kentucky and Tennessee.

The family of David-II lived in South Carolina throughout all of this period of time, living in Edgefield and Spartanburg Districts. Four sons of David, namely Cain, Elijah, John and Simon served brief periods of militia service during the war, but none of them long enough to apply later for veterans pensions or benefits. Elijah and his brother Elisha moved across the state line to Georgia probably shortly before 1790.

With the start of the Federal census, the identification of Gentry family members becomes much easier, but 1790 census records for all of Virginia, Person County, North Carolina, and all of Georgia, Kentucky and Tennessee are missing. The census records for South Carolina exist but were recorded in 1792 rather than 1790. The 1800 census records are missing for almost all of Virginia (Louisa Co is an exception), and for all of Georgia, Kentucky, and Tennessee. 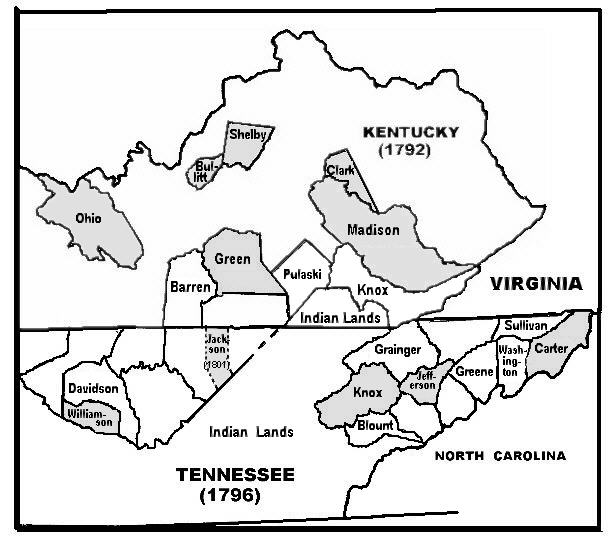 The sons of David-II had varied fates during this time period. Elisha died in Clarke County, Georgia in 1803. His brother, Elijah, was living in Georgia during most of this time period also. Simon died in Edgefield Dist., South Carolina, between 1792 and 1800. Hezekiah, Allen Cain and John were living in Edgefield and Abbeville Districts in 1790 and 1800. David Jr. was in Pendleton Dist. at the time of the 1790 census then probably died before 1800. 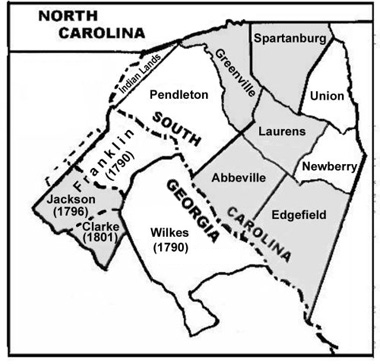 John of Botetourt County's son, Hugh, was listed in the 1800 tax list for Shelby County, Kentucky that was published in lieu of the 1800 census. Hugh's presumed brother, John, was living in Greene County, Tennessee, for much of this period of time before moving to Ohio in about 1805. Their brother, Joseph is thought to have been living in Grainger County, Tennessee. David, the Revolutionary War veteran (if a part of John-II's family?) moved to Jackson County, Tennessee by 1801.

John of Botetourt County's sons, Hugh and Joseph, appeared in tax records in Franklin County, Tennessee in 1812. A possible brother, James, was present in the 1810 census for Augusta County, Virginia. A proposed brother, John, moved from Greene County, Tennessee, to Ohio about 1805 and died before the 1810 census, being survived by his widow, Hannah Cox Gentry and a number of children.

Conclusion
The above listings, which may be confusing to the casual reader, document an ever-widening spread of Gentrys during the three generations that followed Nicholas, the Immigrant. With frequent exceptions, we can say that the family developed in three different directions based upon its descent from five of the six sons of Nicholas. In a broad sense, the first few generations that descended from the oldest son, Joseph, and from James, remained in Virginia, close to the original homestead of Nicholas-I. The generations that descended from Samuel and David, moved south to Lunenburg County, Virginia, and then from there to North and South Carolina, and from there, various branches continued on west, mostly to Tennessee, Georgia, Alabama, Arkansas, and Mississippi, but with some moving especially to Indiana. The third branch, the generations that descended from Nicholas-II, moved westward almost immediately, first into Albemarle County, Virginia, and then on primarily to Kentucky and Missouri but with a very significant fraction moving into Tennessee along with Samuel's descendants.

© 2014, W.M. Gentry - All rights reserved. This article may be reproduced in whole or in part for non-commercial purposes provided that proper attribution (including author and journal name) is included.